It stopped raining for about 2 hours on Tuesday morning, and I was out pulling weeds as fast as I could.  Unfortunately, the rich clay soil in Palo Alto means that weeds that set in, stay in, even when you try to amend the soil.  When it rains late in the season, like this, it’s the perfect opportunity to pull weeds that set in long roots that are really hard to pull as the weather warms up and the soil dries out.

Although there are a number of great tools out there to use on weeds, I tend to use my bare hands (I could give you 100 reasons why this is a terrible idea – it’s a bad habit) and a digger (also called a weeder – a long, forked tool) or, in a pinch, a long flat-head screwdriver.

If pulling isn’t an option, dig down right next to the plant with the digger, and then apply force downward, wrenching the plant, with the root, upwards.  Sometimes you have to do this repeatedly, moving around the plant until the roots are all pulled free.

My targets today were: 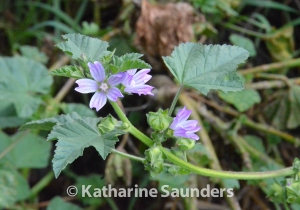 I LOVE mallow, especially in its cultivated form “Cape Mallow.”  However, the variety of mallow we get in our gardens is usually “Common Mallow” or Malva neglecta (isn’t that an awesome name?)

While common mallow can be very pretty, it spreads really fast and is invasive.  The tap roots extend down sometimes more than twice the height of the plant above ground, and so they can be impossible to pull successfully. 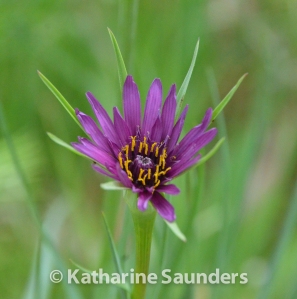 I also love salsify, because it’s beautiful, but if you leave it in, you will be overrun, especially on your lawn (and your neighbors’ lawns, too.)

Just like mallow, salsify has long roots which are easy to pull in wet weather.  However, I find that it’s hard to pull the younger plants.  When they get 8 inches tall or more, it’s pretty easy to pull them up, root and all.  Smaller plants will break in the middle.

Plants that look like dandelions (including the spiky thistles) are always on my weed hit list, but they’re easier to pull when it’s wet.  Unless the plant is small, I recommend always using a digger to help pull out the root intact.

WARNING:  If it looks spiky, it will probably hurt to touch it.  Please use gloves, especially because we also get stinging nettles in this area, and they leave a nasty burn that can take hours to subside.

See that nasty spiky leaf next to the bur clover?  Those little white hairs get stuck in your skin like splinters, and itch and burn ALL day. 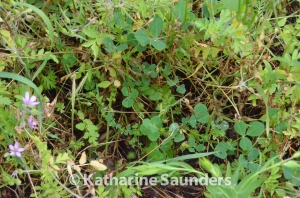 (Bur clover hiding under other weeds)

Bur clover is always on my weed hit list as well, primarily because it, along with fox tails, can really hurt pets.  Early in Spring, you can catch them before the burs have dried and fallen off into the soil, to try to control it for next year, too.

Although they’re easy to pull, I recommend taking great care because they’ll drop the burs with any light tug.  Follow the branches down to the soil level, to pull the root directly – one root usually connects to many branches.  Because bur clover hides under other plants, you’ll need to pull it up gently, so none of the burs fall off into the soil.

The rule is that, if it’s easy to pull, then the plant is probably trying to trick you.  Pull it fast and you’ll end up helping it spread.

Poppies look like weeds until they bloom, so be careful to avoid pulling them.  They look like carrots when they’re younger: 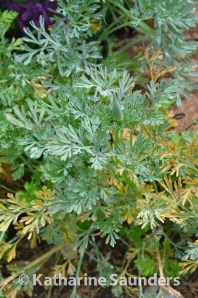 But bloom into beautiful orange jewels:

Especially in the early Spring, they can be a good source of food for the bumbles.

Not sure what to do after the big frost? This article has great advice: Farmer Fred - After the Freeze
Have a question? Send me email.